The Beechcraft Model 18 (or "Twin Beech", as it is also known) is a 6- to 11-seat, twin-engined, low-wing, tailwheel light aircraft manufactured by the Beech Aircraft Corporation of Wichita, Kansas. Continuously produced from 1937 to November 1969 (over 32 years, a world record at the time), over 9,000 were built, making it one of the world's most widely used light aircraft. Sold worldwide as a civilian executive, utility, cargo aircraft, and passenger airliner on tailwheels, nosewheels, skis, or floats, it was also used as a military aircraft

Currently in its Original Condition with the options of having it Polished and Mounted.

Version of Model 18B capable of being fitted with skis or floats.

Model C18S
Variant of B18S with seating for eight passengers, and equipment and minor structural changes

C-45D
Designation given to two AT-7 aircraft converted as passenger transports during manufacture, redesignated UC-45D in January 1943 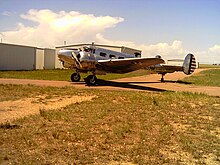 C-45E
Designation given to two AT-7 and four AT-7B aircraft converted as passenger transports during manufacture, redesignated UC-45E in January 1943

AT-11 at the Barksdale Global Power Museum

AT-7 Navigator
Navigation trainer based on C18S, with an astrodome and positions for three students, powered by 450-hp Pratt & Whitney R-985-25engines; 577 built

AT-11A
Conversion of AT-11 as navigation trainer; 36 converted

CQ-3
Conversion of UC-45F, modified to act as drone control aircraft, redesignated as DC-45F in June 1948 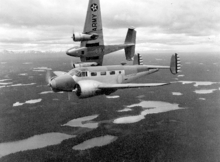 F-2
Photo-reconnaissance version based on B18 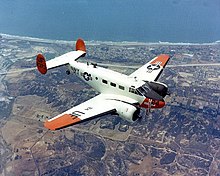 JRB-1
Photographic aircraft, based on the C18S, fitted with fairing over cockpit for improved visibility, 11 built 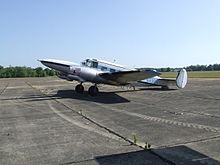 Hamilton Westwind III conversion at an airfield in Tennessee