Here we have a lovely propeller manufactured by Hamilton standard during the 1940s for a Lockheed Ventura.

The Lockheed Ventura, also known as the Lockheed B-34 Lexington, was a twin engine medium bomber of World War II, used by United States and British Commonwealth forces in several guises, including maritime patrol.

The Ventura was developed from the Lockheed Model 18 Lodestar transport, as a replacement for the Lockheed Hudson bombers then in service with the Royal Air Force.

This propeller has been chemically stripped to remove all the paint and painstakingly polished on both sides to a mirror finish.  It has undergone 18 stages of sanding and 5 stages of polishing to achieve a perfect flawless finish. Mounted on a custom-made base powdercoated in authentic olive drab paint finished with a highly polished aluminium top.

Manufactured in the USA

The Ventura was very similar to its predecessor, the Lockheed Hudson. The primary difference was not in layout; rather, the Ventura was larger, heavier, and used more powerful engines than the Hudson. The RAF ordered 188 Venturas in February 1940, which were delivered from mid-1942. Venturas were initially used for daylight raids on occupied Europe but like some other RAF bombers, they proved too vulnerable without fighter escort, which was difficult to provide for long-range missions. Venturas were replaced by the faster de Havilland Mosquito. The Venturas were transferred to patrol duties with Coastal Command as the Mosquito replaced them in bomber squadrons; 30 went to the Royal Canadian Air Force (RCAF) and some to the South African Air Force (SAAF). The RAF placed an order for 487 Ventura Mark IIs but many of these were diverted to the USAAF, which placed its own order for 200 Ventura Mark IIA as the B-34 Lexington, later renamed RB-34.

Before completion of the first O-56, the U.S. Army Air Forces dropped the "O-" category used to designate "observation" (reconnaissance) aircraft. The O-56 was redesignated the RB-34B (the R denoted 'restricted' meaning it was not to be used for combat). Before the first of these flew, the design was redesignated again as the B-37 with a higher powered version of the R-2600, later it also was designated the RB-37. 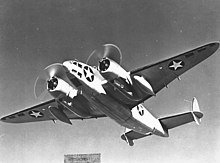 The PV-1 Ventura, built by the Vega Aircraft Company division of Lockheed (hence the "V" Navy manufacturer's letter that later replaced the "O" for Lockheed), was a version of the Ventura built for the U.S. Navy (see Venturas in U.S. Navy service below). The main differences between the PV-1 and the B-34 were the inclusion of special equipment in the PV-1, adapting it to its patrol bombing role. The maximum fuel capacity of the PV-1 was increased from 1,345 gal (5,081 l) to 1,607 gal (6,082 l), to increase its range; the forward defensive armament was also reduced for this reason. The most important addition was of an ASD-1 search radar.

The PV-1 began to be delivered in December 1942, and entered service in February 1943. The first squadron in combat was VP-135, deployed in the Aleutian Islands in April 1943. They were operated by three other squadrons in this theatre. From the Aleutians, they flew strikes against bases in Paramushiro and Shimushu, Japanese islands in the Kurile chain. Often, PV-1s would lead B-24 bomber formations, since they were equipped with radar. In late 1943, some PV-1s were deployed to the Solomon Islands as night fighters with VMF(N)-531, a Marine Corps fighter squadron.

The PV-2 Harpoon was a major redesign of the Ventura with the wing area increased from 551 ft² (51.2 m²) to 686 ft² (63.7 m²) giving an increased load-carrying capability, and which first flew on 3 December 1943. The motivation for redesign was weaknesses in the PV-1, which had shown itself to have problems in taking off when carrying a full load of fuel. On the PV-2, the armament became standardized at five forward-firing machine guns. Many early PV-1s had a bombardier's position, which was deleted in the PV-2. Some other significant developments included the increase of the bombload by 30% to 4,000 lb (1,800 kg), and the ability to carry eight 5-inch (127 mm) HVAR rockets under the wings.

While the PV-2 was expected to have increased range and better takeoff, the anticipated speed statistics were projected lower than those of the PV-1, due to the use of the same engines but an increase in weight. The Navy ordered 500 examples, designating them with the popular name Harpoon.

Early tests indicated a tendency for the wings to wrinkle dangerously. As this problem could not be solved by a 6 ft (1.8 m) reduction in wingspan (making the wing uniformly flexible), a complete redesign of the wing was necessitated. This hurdle delayed entry of the PV-2 into service. The PV-2s already delivered were used for training purposes under the designation PV-2C. By the end of 1944, only 69 PV-2s had been delivered. They finally resumed when the redesign was complete. The first aircraft shipped were the PV-2D, which had eight forward-firing machine guns and was used in ground attacks. When World War II ended, all of the order was cancelled.

With the wing problems fixed, the PV-2 proved reliable, and eventually popular. It was first used in the Aleutians by VP-139, one of the squadrons that originally used the PV-1. It was used by a number of countries after the war's end, but the United States ceased ordering new PV-2s, and they were all soon retired from service.